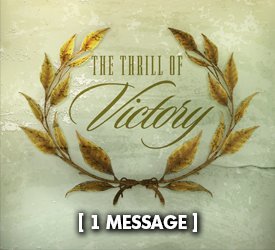 The Thrill of Victory

In Christ we are experiencing victory continuously, consciously and constantly in the Lord. God always leads us to victory. Even in the face of the greatest adversity, we know that we will eventually make a safe landing. The problem is, too many Christians are living beneath their privilege, slumping in defeat, when they should be soaring in victory. In this message, Dr. Merritt talks about the victorious Christian life versus what some might call the "normal" Christian life. Because victory for the Christian is not abnormal, it is normal. If you are not living in victory, your life is subnormal.

We are to preach victory, conquest, triumph, because a battle has been fought, a war has been won, and our Commander in Chief, who has won the victory, is none other than the Lord Jesus Christ. All of us are to be out and about announcing the good news of the victory over sin, Satan, and death, that has already been won. We need to have that kind of look on our face. We need to have that kind of joy in our heart. We need always and every place to be giving off the sweet smell of victory that others might know that thrill of being victorious in the Lord Jesus Christ.

"When I am speaking about victory, I am not talking health and wealth; I’m not saying it will be all honey and no bees, all flowers and no trees. Will there be adversity? Yes. Will there be opposition? Yes. Will there be difficulty? Yes. There is a great difference between victory and success. The world measures success by money and might. There are scads of people all over this world who are successful failures. They are building bigger barns, buying bigger houses, making bigger salaries, and they are on a one-way street to hell. I want you to understand that the exact moment you give your heart to Jesus Christ and surrender to Him as your Lord, from then on always in every place, you are on the winning side." --Dr. Merritt