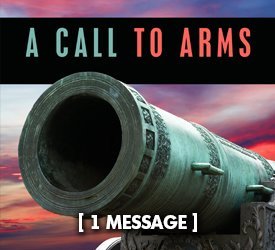 A Call to Arms

Does life sometimes seem like a daily battle? According to Scripture, spiritually, life is a battle. Some are in a family battle, fighting for their marriage, or fighting for their children while others are in a financial battle. These might not be able to get a handle on their money, and their struggling just to make it. Some are having a fitness battle. The battle may be against weight or being out of shape or perhaps sick with a disease. Some are battling a faithfulness battling, finding it difficult to maintain a strong walk with the Lord.

Some people want to be monks in monasteries and totally get away from this world; never confront it, never do battle, just lock themselves in an ivory tower; sing and chant and read the bible until Jesus comes. On the other hand, there are those who want to leave the monastery and go out in the main street and confront this world and try to change the world on their own. One is just as wrong as the other.

Too many Christians are being defeated in their daily lives because some are not showing up for the war. Some do not even know there is a war, and some that do have no idea how to use the weapons God has equipped us with. If we want to have victory over the enemy, then we need to heed a call to arms. In this message, Dr. Merritt gives practical helps from the Bible to equip you for the battles of life--to not only fight them, but win them!

"Apart from prayer and the power that prayer brings, it doesn’t matter how many buildings you build, how much budge you can raise, or how many benefits you can give, it will all come to naught without God. When you work you see what you can do, but when you pray you see what God can do. The Hebrew word, 'nissi', translated banner, means 'war flag'. It is an emblem of victory that flies after the battle is fought and the battle is won. The only one that deserved glory for the victory was God. We enjoy the blessings of victory, but only God gets the praise for victory." --Dr. Merritt